Easy-to-back Rome wins on his 1st start since November 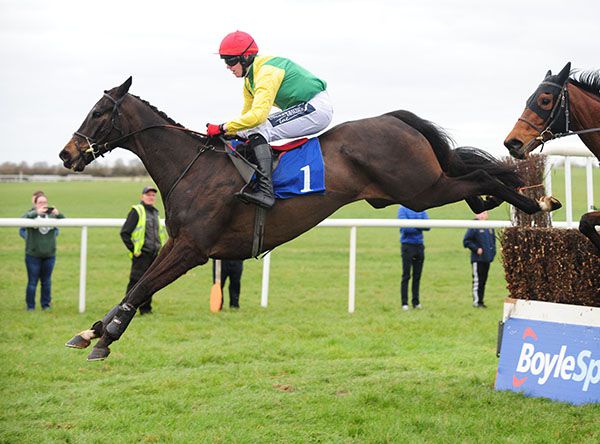 Willed home by the layers Sizing Rome (9/2 out to 8/1) clung on in the Duggan Veterinary Supplies Handicap Chase from well-backed favourite Bee A Beneficiary at Thurles.

At opposite ends of the handicap, punters certainly nailed their colours to the mast on the lightly-weighted Bee A Beneficiary (5/2 into 2/1).

Only a neck separated them at the finish and Declan Queally's mare (slight mistake 3 out and jumped right at the last) couldn't quite bridge the gap to the always to the fore Sizing Rome.

"He would need another mile," said successful handler Jim Dreaper on the Keith Donoghue-ridden victor.

"He ran well at Cork for a novice and he didn't as such make mistakes there but horses fell in front of him over the final three fences, otherwise he'd have been close.

"Of course we were very clever by leaving him off after the first week in November because it was going to be soft from then on, which didn't happen, but maybe it's all for luck!

"There is hardly a low enough class race at Fairyhouse or Punchestown for him but where ever we think he has a chance of winning that's where we'll go."

The Irish Horseracing Regulatory Board Veterinary Officer reported to the Stewards that Celebrity Status trained by Conor O'Dwyer was found to have blood at the nose as a result of an exercise-induced pulmonary haemorrhage post race.