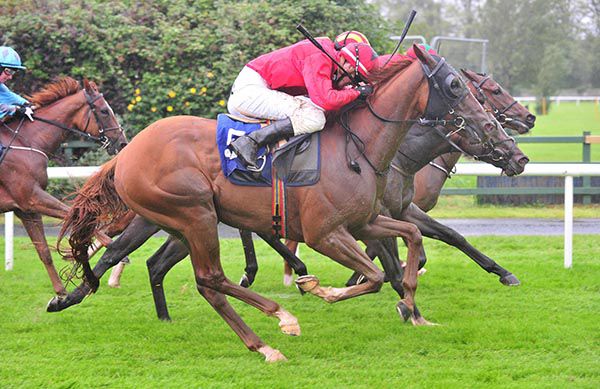 Dare To Flare came wide and late to claim the Bunkers Bar Handicap at Killarney for trainer Andy Slattery.

The Dandy Man gelding was settled towards the rear in the mile contest before being asked, by Ben Coen, to make up ground on the wide outside early in the straight.

The winner had proven an easy to back favourite, returning 5/1 having been 11/4 this morning. He was recording his second win of the season having also scored at Fairyhouse last month.

"He lost his chance at the start at the Curragh the last day and nearly lost it again today but he does that. He is after throwing away so many races that way,” said Slattery.

"I'll step him up to 1m2f as well and I'd say he could go jumping eventually. Being by Dandy Man you wouldn't think it but he is tough and keeps going on soft ground.

“I don't see why not and we didn't jump him yet but he is a good athletic horse so I'd imagine he'd jump."