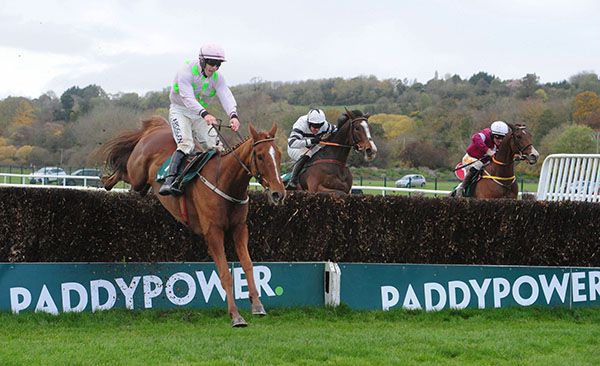 Hayes stepped up for the winning ride on Brahma Bull on chase debut at Tipperary in May and while the eight year old finished tailed off in a Grade 3 chase at the same track just a month ago, Hayes was today reunited with the gelding.

Brahma Bull made all and in the end stayed on well on the run-in to comfortably beat Ex Patriot by five lengths.

Mullins was represented by his son Patrick Mullins who later reported “he continually surprises us as he doesn't do an awful lot at home but he has a fantastic pedigree and is by Presenting.

“Brian deserves a lot of credit because he got the horse jumping spectacularly well in front. Brian won a beginners chase on him at Tipperary and that's what got him on him today and he is a very under-rated jockey. He comes in two or three work morning a week to us.

“I don't where we go now but obviously to all those Grade 2 or Grade 1 chases.

“He hadn't been an easy horse to train in his early career and didn't run until he was six. He is more mature now and is taking his training better.”