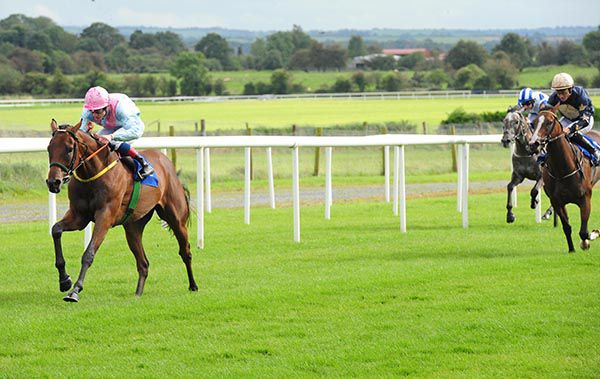 A second success within a fortnight over Roscommon’s seven furlongs was secured in the opener, the Irish Stallion Farms EBF Median Auction Race, by Noel Meade’s Helvic Dream

Gavin Ryan was up top to help with his seven pound claim but Helvic Dream didn’t need any assistance regards his nine stone seven impost, seeing as he slammed Champers Elysees and Agent Zero by four and three parts of a length and the same.

The son of Power is an exciting type, especially if he can transfer this level of performance to when he encounters a livelier surface.

“Gavin said it was very easy and he did everything well for him. They went a good gallop, and he did exactly what he said he was going to do. He loved the ground and quickened up well on it," said Meade.

“Colin (Keane) loved him and said he was a lovely horse when he rode him, and Chesney (Chris Hayes) said he was still green the last day and would improve a lot. I’d say he did improve a good bit.

“I claimed off him as Dermot (Weld) was claiming 5lb off his (Mere Catherine) and we were already giving her 9lb.

“I was very impressed with Gavin how he summed up the race beforehand and knew what he wanted to do. He’s obviously a smart kid.

“I’d say we will leave him for the Final (of the Foran Series) now.”