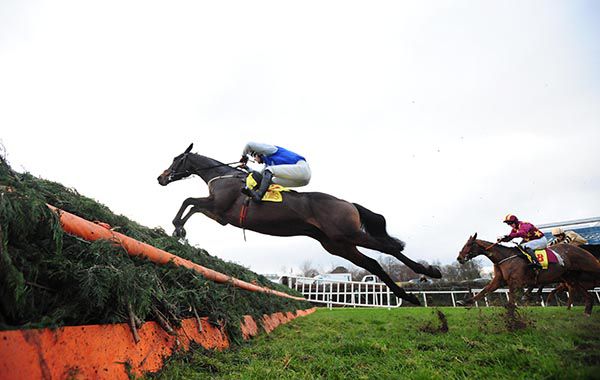 Kemboy with David Mullins in the plate
© Photo Healy Racing

Kemboy made it four victories in a row with a scintillating display in the featured Grade One Savills Chase at Leopardstown.

David Mullins sent him the lead off a slow pace just before the halfway stage and the six-year-old gelding lobbed along sweetly. Monalee pressed Kemboy two out but he came under pressure turning in as Mullins still appeared to have plenty of horse under him.

Once Kemboy cleared the last he asserted from the pursuers and hit the line seven and a half lengths to the good at 8/1.

Monalee could make no impression in second at 11/2 while Road To Respect who stumbled badly towards the rear after three out which saw him lose plenty of momentum, finished well for third (9/4f).

Willie Mullins said: “It’s fantastic for Supreme Racing to win a Grade One the other day (with Aramon) and then to win another today.

“When I saw David going on past the stands I was thinking what choice words I was going to have with him afterwards. He said they slowed down the pace too much and his horse was keen, and he thought he got an easy lead in front.

“He still had plenty left in the tank at the last and the way he flew up the hill after the last was very good. He’s obviously improved.

“We didn’t bring him to the Ladbroke at Newbury. I was afraid of the ground and carrying that type of weight would take a long time to recover. He had improved at home and we said we’d give him his chance to be a good horse. He’s made the step up now, and I think there is still plenty of improvement left in him.

“We have given him such a break from Clonmel to here that we might give him a break the whole way to Cheltenham and go there with a fresh horse."

He added: "I couldn’t really see him winning and I said to David beforehand to try and get as much money as you can. We actually looked up the racecard to see where the money was down to sixth.

“David was very brave to do what he did (going to the front) but he rides like that with gut feeling. He’s not afraid to do it which is good because he knew well if things didn’t work out what he was going to face from me.

“I was as surprised as anyone as I thought he would fold back into the field but he was as fresh coming into the straight as he was the first time.”

David Mullins said: "We were going very, very slow and even when I hit the front with a lap to go we were still going slow.

"Everything went to plan really except we had to just let him go - no-one took me on. He jumped well and there is still plenty to improve on I think.

"He could be a proper horse."