Penny Out returns to form with Limerick win 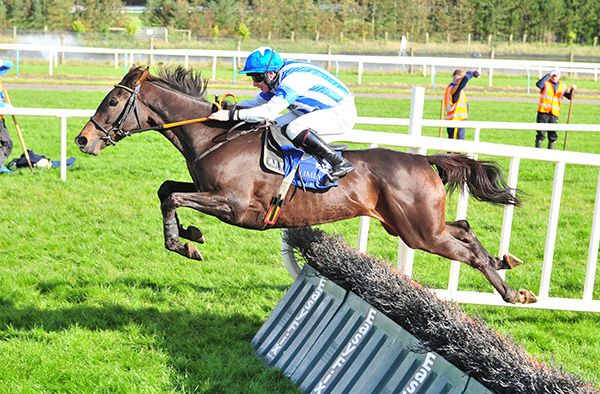 Veteran work-rider John Kiely worked his magic with Penny Out in recent weeks as the 82 year old trainer produced the mare in tremendous shape to make all and win the Irish Racing Wall Calendar (Mares) Handicap Hurdle at Limerick today.

The daughter of Salutino was very slowly away when finishing a tailed-off last on her previous run on the flat at Cork on October 1, with Kiely subsequently taking matters into his own hands by assuming riding duties at home on the five year old mare.

Kiely was at the Curragh and afterwards jockey Enright revealed “Mr Kiely has been riding her work for the past two weeks and they thought she was working very well at home.

“He wasn't here today and when I came out to the parade ring they said 'were you talking to him' but I said I got no phone call. They said there is no need, to just jump off in front and thankfully it worked out.

“She jumped brilliant the whole way and got her way through the ground and handled it.

“I could feel the other horses coming to me coming down the hill because she was picking up the bridle all the way down to the second last and after I jumped the second last I could see I was well in front.

“It is great to ride a winner for Mr Kiely — the last time I rode a horse for him was five years ago and it won in the same colours.”