Road To Dubai enjoys his spin around Ballinrobe 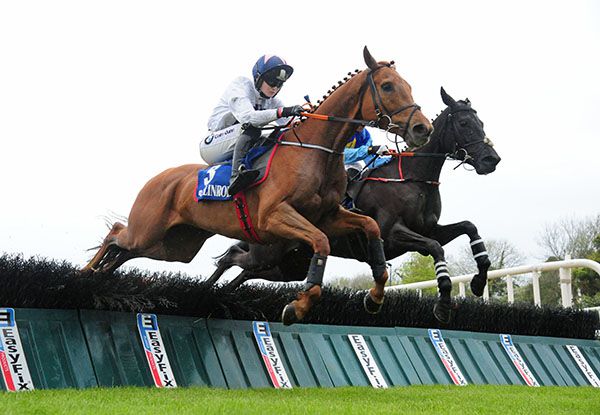 Odds-on favourite Road To Dubai stretched clear under Katie O'Farrell in the final furlong of the opening maiden hurdle at Ballinrobe.

A good jump at the second last saw Tooreen Legend hit the front with Road To Dubai in close pursuit as Bachelor Pad began to weaken.

Road To Duabi travelled well to lead before the last where Bonarc made headway to chase him in second.

Road To Dubai was in charge turning for home and went on by four lengths at 8/11 for Gordon Elliott.

"He's running for a good owner (Brendan Scully) so it's important.

"He got a break after his first run for us as he'd never had one. He came off the Flat - he was with George Scott."

The Stewards received a report from the Clerk of the Scales, Mr. P.L. Malone, that L.P. Gilligan, rider of Pat Coyne had presented himself at scales to weigh out at 2lbs overweight which had not been declared under Rule 195(i). Evidence was heard from the rider concerned who stated that he was confident that he could draw the correct weight but admitted that he had made a miscalculation. John Nicholson, trainer of Pat Coyne, stated that he had made the booking through the rider's agent and would be satisfied to allow the overweight as the rider was familiar with the animal. Having considered the evidence, the Stewards granted permission for L.P. Gilligan to ride Pat Coyne but suspended him for two race days for a breach of Rule 195 (i) having taken his previous record into consideration.