Sherpa climbs to the top at Roscommon 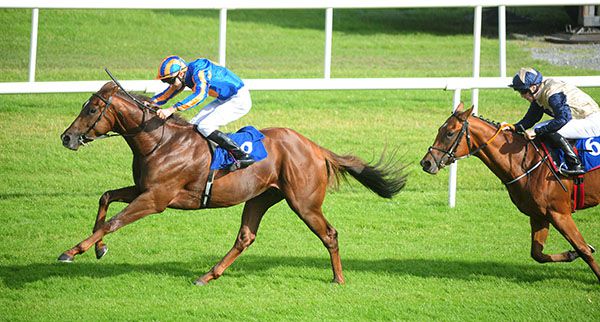 The easy-to-back Sherpa made it third time lucky in the opener at the Roscommon, the Irish Stallion Farms EBF Maiden.

An eye-catching sixth on debut at the Curragh last month, the Aidan O'Brien trained Zoffany colt since disappointed when seventh at the same venue.

As short as 2/1 this morning, the chestnut victor touched 5s on-course, before going off a 9/2 chance under Donnacha O'Brien.

Settled in mid-division, he was pushed along in fifth approaching the straight, coming with his challenge on the outer a furlong and a half from home.

He soon edged to the front and kept on well inside the final furlong to see off the challenge of Maker Of Kings (4/1jfav from 11/2) by two and a quarter lengths.

Billy Lee was aboard the runner-up for Gordon Elliott, while Agent Zero (13/2) was another two and a quarter lengths away in third. Ivaquestion was the other joint-favourite and he finished fourth.

"He always worked nicely enough at home and he was a little bit disappointing on his first two runs, maybe he's just a little bit of a slow learner," said Donnacha O'Brien.

"I thought he done it well today, he was green when he got to the front.

"I wasn't sure about the ground the last day at the Curragh, I thought he wanted better ground, but he seemed to handle it better today."