Slevin rides another winner - for local connections at Down Royal 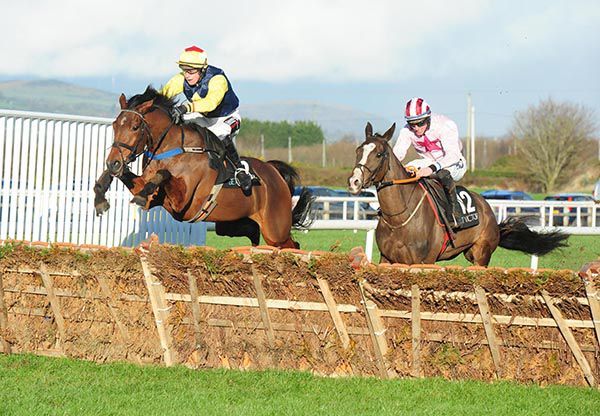 J J Slevin had a weekend to remember with successes at Cheltenham and Naas for his cousin Joseph O’Brien and the Enniscorthy man kept up the good form aboard Curious Times in the Get A Run For Your Money With BetVictor Maiden Hurdle at Down Royal.

With a first-time tongue-strap on the 105-rated Stuart Crawford-trained Curious Times (better jump at the last) defeated 5/4 favourite Black Tears by two and three parts of a length.

Owned by the locally based Sloans (currently in Barbados), Curious Times was clipped from 20/1 into his returned 16s and Crawford said: "I thought he would have won before now. Ideally going over fences is what he was bought to do.

"We said this year we would try and get a wee bit more experience into him - a handful of runs and leave it at that.

"He's obviously better than a couple of runs he has shown. Decent ground is the key to him as well. JJ (Slevin) just said he thought that ground was probably as dead as he would want it. He's given him a good ride today, he has ridden him a couple of times.

"He's a big horse too so a wee bit of time is helping him as well. He's not entered in Cheltenham in any of the hurdles but he could be a horse for Ayr or Aintree or Punchestown. I'd imagine we would aim for something there and go over fences next year.

"He's a big, scopey horse. I was there the day we bought him and he was a handyish horse and that was one of the things we liked about him and he has done nothing but grow. He's still a lot of filling out to do.

"He's starting to get it together. The first two pulled well clear and there is a bit of form there with a couple of them. If you are going to have one coming to the last with you it was always going to be Gordon's (Elliott, Black Tears)."

Mr. J.R. Banahan, IHRB Starter, reported to the Stewards Secretaries that he started this race by flag due to a fault in the mechanism of the starting equipment.

Owing to low sun, the Stewards granted permission for the second last (Hurdle 2) to be omitted from this race