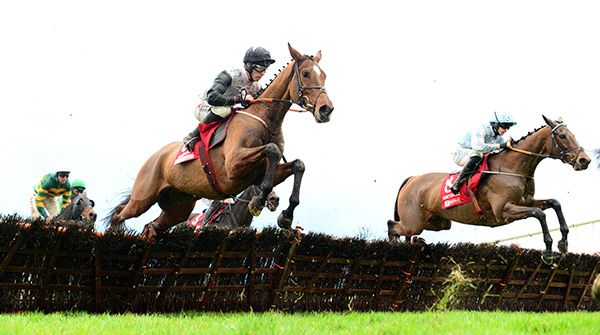 Teahupoo caused a shock in the Bar One Racing Hatton's Grace Hurdle as Honeysuckle rsquo;s unbeaten run came to an end at Fairyhouse.

Henry De Bromhead’s mare has begun her season by winning this contest in each of the last three years and went to post looking to create history by becoming the first four-time winner of the Grade One hurdle.

Starting what is likely to be her last season in training, everything seemed to be going to plan for the eight-year-old and her ever-present accomplice Rachael Blackmore when they cruised to the lead two from home.

But Willie Mullins' Klassical Dream and Teahupoo were in striking distance at the final flight, and it was Gordon Elliott’s 20-1 shot who pulled out most in the closing stages to prevail on the line.

A neck was the margin of victory, with Klassical Dream (5/1) in second and Honeysuckle (4/11f) another two-and-a-half lengths away in third.

The front three pulled a massive 30 lengths clear of Ashdale Bob in fourth.

De Bromhead said: "Rachael is just very disappointed like all of us but it's a horse race and sadly it was going to happen sometime.

"She has been incredible so far and will be again. It's just disappointing today and that's the way it is. I'm delighted for Robcour and I said to Brian (Acheson) beforehand that if we don't win it, I hope you do and I genuinely meant it.

"Klassical Dream is a Supreme Novices' winner and I saw Teahupoo come up the straight one day in Gowran in the Red Mills Hurdle like a weapon on soft ground. The more it rained, the more he was coming into play.

"That's the game we are in unfortunately and they get beaten. As disappointing as it is, we've had an unbelievable run with her so far and I've no doubt it's not over yet."

Gordon Elliott, who was completing a treble, said: "He was very good last year on soft ground and we ran him on good ground a couple of times which was probably a mistake but we are still learning about the horse.

"Jack gave him a wonderful ride. He let it all happen in front of him and there is only one winning post.

"It's been a brilliant day with two Grade 1s and we were only beaten a head for three."

Brian Acheson added: "That was unexpected. I came here wanting Honey to keep winning and if we finished second that was brilliant. We have such a close association with Kenny (Alexander) and Henry.

"I'm genuinely in shock. I thought the mare was unbeatable - it will hit me tonight.

"There is a ting of sadness that the run is ended. I just hope she comes back and beats the crap out of Constitution Hill!"

Jack Kennedy, completing a Grade 1 double, remarked: "It's unbelievable and I'm delighted. He was supposed to run in the Morgiana but we thought the ground was a bit on the good side for him, he wants this ground so thanks be to God we didn’t run him there.

"Gordon asked me what I wanted to do and I said I’d race in fourth or fifth. He said he’d rather see me coming home riding him to be second or third instead of riding him to win and fizzling out of it. I done that and it just all fell into place really.

"We went a lovely even gallop and I was very happy the whole way around. I turned into the straight, thought I’d be second or third and I’d be delighted with the run, but he just kept finding more and it was great.

"I'm after going one better now than my best season ever winners wise and touch wood, long may it last. Hopefully I can keep it going."

The Raceday Stewards interviewed Rachael Blackmore, rider of Honeysuckle (GB), concerning her use of the whip in the closing stages of this race. Having viewed a recording of the race and having considered Ms. Blackmore's evidence, the Raceday Stewards were satisfied that no further action was warranted.