Velocity bids to bounce back at Navan 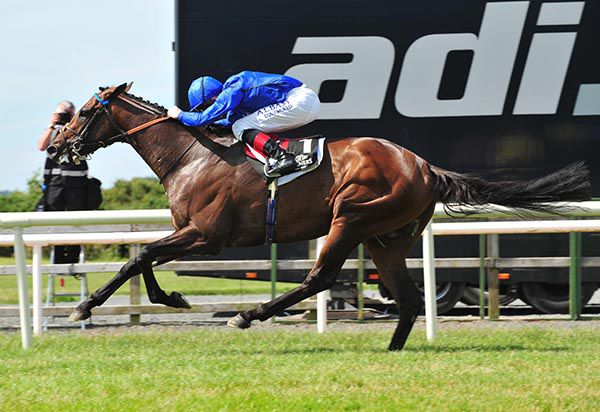 Change Of Velocity heads a field of just four runners for the Irish Stallion Farms EBF Race at Navan on Saturday.

Jim Bolger's colt won a Gowran maiden and the Ulster Derby at Down Royal in June before finishing sixth in the "Ragusa" Handicap at the Curragh on Irish Derby weekend.

The son of Teofilo is the highest-rated of the quartet set to go to post.

The Michael O’Callaghan-trained Grace Rafaela who runs for the first time since last October, completes the line-up.

The most valuable race of the afternoon is the E24,000 Foran Equine Irish EBF Fillies Auction Maiden.

Ger Lyons sends Sakura into battle just a week after finishing third on her racecourse debut at Naas, while Adrian Murray’s Ascot Dreamer has also shaped with promise. Queen Mia trained by Dermot Weld, is perhaps the most interesting newcomer.

The Ballydoyle handler has a second string to his bow in Fantasy while the Lyons-trained Rita Levi will be well fancied to make it third-time lucky following successive runner-up finishes at Navan and Naas.

Andrew Slattery’s View The Bay has also finished second twice and has a good opportunity to get off the mark in the Lynn Lodge Stud Maiden.

Tom Cleary’s Landline bids to complete a quick-fire hat-trick in the Navan Members Handicap. His biggest threat could be Sweetest Taboo a winner at Bellewstown last week for Willie McCreery. Lady Nathaniel and Sharjah are a couple to consider in the Emerald Facility Services Event Cleaning Apprentice Handicap, while last-time-out winners Rince Deireanach and Stormy Tale lock horns in the concluding Come Racing September 8th Handicap.