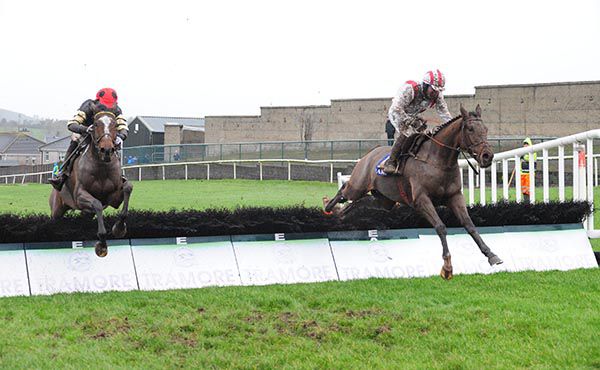 Western Sea made it two from two since joining Ross O’Sullivan when following up on his Thurles success from a fortnight back in the www.tramore-racecourse.com Handicap Hurdle.

Again the layers knew all about the win of this T J Ward-owned five-year-old as he found a starting price of 2/1 from an opening show of 7/2 on track.

The outsider had to give best to Ross O’Sullivan’s charge from the last, and a length and a half split them at the line. Musical Ava came in sixteen lengths off the principals in third.

"That was great. He has climbed from 86 to 95 today. We'll see how far he can go. Mark said he handled the ground fine, it was the complete opposite to the last day. It's great that he handled soft ground today, it gives us more options," said O'Sullivan.

"He settled better today, my biggest fear was that he'd be keen on that ground. He was very keen the last day. If he keeps climbing it will be great, he might go for another handicap now after Christmas. He'll keep going the handicap route for the time being and we'll see how far we can go.

"The owner has been lucky for me. We've had four runners for him now and four winners.

"We could just keep climbing with him, or step him into a better handicap off a light weight. We'll see what is there for him. Two miles seems to be okay for him at the moment."

Under the provisions of Rule 90, the Stewards allowed Black Ice trained by Mark Fahey, to run on receipt of the trainer's written assurance that the error identified in the certification of vaccinations would be corrected in accordance with Rule 91 within the timeframe specified.

Garrett James Power, trainer of Russellstown reported to the Stewards' Secretaries that his charge had a wind operation since its previous run.

The Irish Horseracing Regulatory Board Veterinary Officer examined It's A Long Story trained by Gordon Elliott, at the request of the Stewards and reported the animal to be post race normal. Samples were taken for analysis.

J.W. Kennedy, rider of It's A Long Story, trained by Gordon Elliott, reported to the Stewards' Secretaries that his mount never travelled.

Rachael Blackmore, rider of Constable Buckley (GB) trained by J. Morrison, reported to the Clerk of Scales that her saddle slipped and she pulled up thereafter.