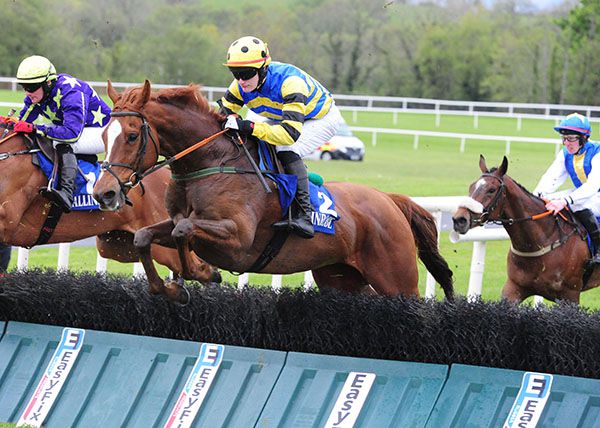 Weekend Offender stayed on strongly to take the Adare Manor Opportunity Handicap Hurdle in Ballinrobe at 20/1.

The six-year-old gelding made headway under Daniel Holden to race third after the penultimate flight.

Once he jumped the last, he was ridden by Holden and picked off Draycott Place and Lord Boru at the furlong pole.

In the final 150 yards, he moved clear to hit the line two and a half lengths to the good. Whatsyourstatus got up for second at 12/1, half a length in front of Lord Boru (7/2).

"That was badly wanted and this fella was a grand horse on the Flat in England," trainer Eoin Doyle said.

"He's been a bit disappointing but he's had a couple of wind operations. He seems to have improved on the back of it.

"His run on the Flat in Dundalk the other night probably brought him on a bit and he has to have that ground.

"It's great for the boys (the South East Racing Club) to get a win. They've stuck with me for a good while and hopefully we can get another day out of him."

The Stewards requested a report from Eoin Doyle, trainer, as to the apparent improvement in form of Weekend Offender (FR), placed first, as compared with its recent form. Eoin Doyle reported that his charge ran disappointingly at Down Royal on the 26th December 2018 where the rider reported post race that his charge made a respiratory noise during the race. Consequently his charge had a wind operation and in his opinion this procedure had the desired effect. Having considered the evidence the Stewards noted the content of the report.

The Stewards received a report from the Clerk of the Scales, Mr. P.L. Malone, that L.P. Gilligan, rider of Rio Gold having weighed out at 1lb overweight, weighed back in at a further 1.3lbs overweight. Evidence was heard from the rider concerned who stated that his boots got damp and the saddle pad had absorbed sweat during the race. Having considered the evidence, the Stewards were satisfied that L.P. Giilligan was in breach of Rule 231 and suspended him for three race days having taken his previous record into consideration.