Zuenoon one to note back in handicap company at Navan 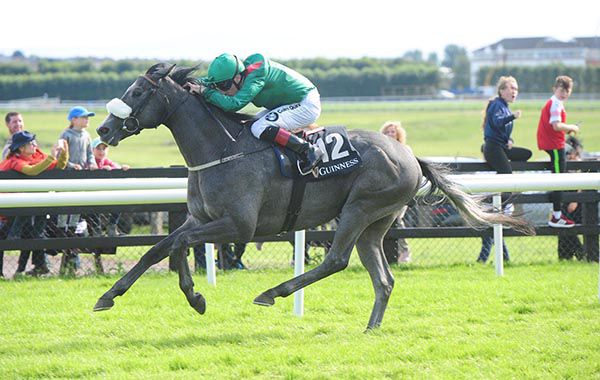 A small but competitive field lines up for the featured Royal County Handicap at Navan today.

Just six got to post for the 50,000 euro contest over 10 furlongs, but it has attracted some progressive three-year-olds.

The Dermot Weld-trained Zuenoon tops the weights and drops back into handicap company, having emerged with credit when finishing fifth in the Group Three Amethyst Stakes at Leopardstown on his latest outing.

He was deployed as a pacemaker for his stable companion Hazapour on that occasion, but stuck on well in the closing stages and despite finishing with only one behind, was only beaten four lengths.

The handicapper reacted by sticking him up 5lb for that effort, but Ben Coen’s claim negates that rise. Nickajack Cave makes just his third outing for Ger Lyons and is open to further improvement.

He was no match for the impressive Georgeville at Roscommon last time, but it was still a decent effort and after running a touch greenly he finished off well.

A mark of 84 looks fair enough, having had a good yardstick in Jupiter Road just behind almost three weeks ago, and the grey may be capable of stepping forward again from that run.

Pensylvania Avenue comes into the race off the back of a narrow success at Killarney.

The handicapper gave him a 7lb rise for that win, which will make life more difficult for him in this higher grade.

The preceding Meridian Security Handicap has attracted just the five runners, but again looks an interesting affair. Construct aims for a follow up a recent success at Roscommon in the one-mile-five contest. John McConnnell’s charge did well to battle back and claim victory that day and a 4lb rise does not look harsh.

Aidan O’Brien will have his hands full at Epsom, but Kangaroo Valley may be able to keep home fires burning in the one-mile-five maiden after a promising comeback run to finish third at Killarney.

Emmet McNamara also takes the mount on Ballydoyle colt Pacific Ocean in the concluding one-mile maiden and he may be able to go one better having shown significant improvement to finish runner-up at Cork last time.