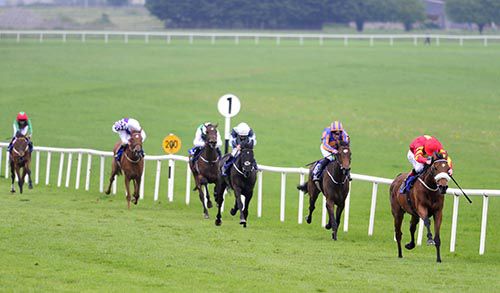 Dermot Weld's four-year-old was sent off the 11-10 favourite on the back of an impressive Listed win at the Curragh, and after moving upsides leader Pretty Perfect on the home turn, the result here was never in doubt.

Sticking on well all the way up the straight under Pat Smullen, Zhukova had seven and a half lengths in hand of Pretty Perfect at the line.

Weld and Smullen made it a double when Flying Bullet landed the Kill Maiden.

The 5-1 chance looked to have the race in safe keeping at the furlong pole, but Mighty Legend produced a strong late surge and was only a head behind at the line.

The treble for the pair came courtesy of Ebediyin (7-2) who travelled sweetly before landing the Tipper Road Race.< Psychedelic Funk made it two wins from as many starts with an impressive display in the Fishery Lane Race.

Ger Lyons' 8-11 favourite was sent straight to the front by Colin Keane, but was only narrowly ahead of Ambiguity at the two furlong pole.

Psychedelic Funk found another gear from there, though, and stretched clear to score by six lengths.

Leigh Roche was happy to bide his time early on the 10-1 chance, but burst into the lead over a furlong out and never looked back, beating Flowerhill Nova by a length and a quarter.< Cuff took a giant step forward from finishing fourth on her Navan debut to land the Irish Stallion Farms EBF Fillies Maiden.

Never far off the pace under Seamie Heffernan, the Aidan O'Brien-trained 15-8 favourite was all out to fend off the late charge of Wayside Flower by a short head.