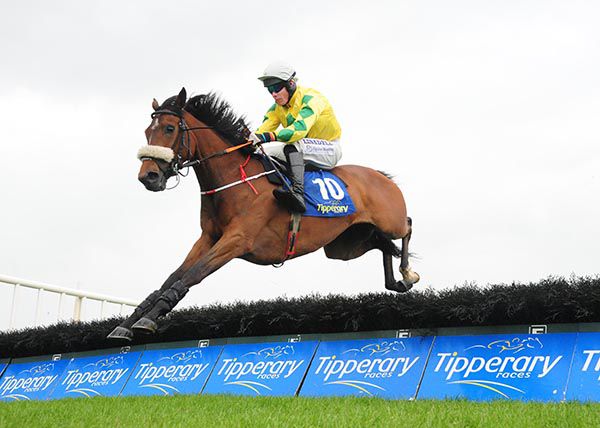 The hat-trick seeking Effernock Fizz is one of 11 declared for the Kitchen Restaurant At The Thatch Novice Hurdle at Bellewstown on Friday evening.

A shock 66-1 winner at Tipperary in May, the Katy Brown-trained bay showed that was no fluke by following up on her next start at Wexford.

She faces her toughest task to date now in this extended two-mile contest, with Coolongolook Act Of God Feel Des Mottes and Razoul her main dangers.

Gordon Elliott trains Coolongolook and he is represented by Lethal Steps in the feature race on the programme, the Seamus Mulvaney Crockafotha Handicap Hurdle.

Having failed to make an impact at Royal Ascot, the son of Lethal Force reverts to obstacles now, with Denis O’Regan booked to ride. Trans Wood who has filled the runner-up spot on her last three starts, is sure to have plenty of supporters in this two-and-a-half-mile affair, while others for the shortlist are Gold Seal Mutadaffeq and Monbeg Chit Chat

Gavin Cromwell is responsible for Mutadaffeq and he saddles Callthebarman in the Anglo Printers Handicap Hurdle.

This looks a very competitive heat, with Thecraicisninety Shake The Bucket, Muyam Spirit and Bluegrass Princess others to consider.

The opening Irish Stallion Farms EBF (C&G) Median Auction Maiden over an extended seven furlongs is one of five Flat races down for decision. Marchons Ensemble had no luck in running when second on debut at Limerick last month and appears the one to beat.

Colin Keane takes the ride on Marchons Ensemble for Ger Lyons, and they team up with Helen Of Albany in the Irish Mirror Maiden.

This daughter of Exceed And Excel will not have to be a star to take this weak contest on debut, with Zippity and Sunset Nova her chief rivals. Eight And Bob will bid to defy top-weight in the Scotch Hall Ladies Day Handicap.

Successful four times since joining the Willie Mullins yard, the son of Big Bad Bob won at Tipperary on his most recent start.

He went up 10lb for that triumph, but still looks well treated off a mark of 65.

Gary Carroll will be aboard the six-year-old gelding and he takes the ride on Early Call in the Meath Farm Machinery Handicap.

Third on his last start at Navan, the Michael Mulvany-trained four-year-old appears to have solid claims in this competitive contest.

The remaining contest on the programme is the Newgrange Motor Centre Claiming Race, with Yuften Tennesse Waltz and Basrah Breeze the standout names.