Masaff the one to beat in Navan feature 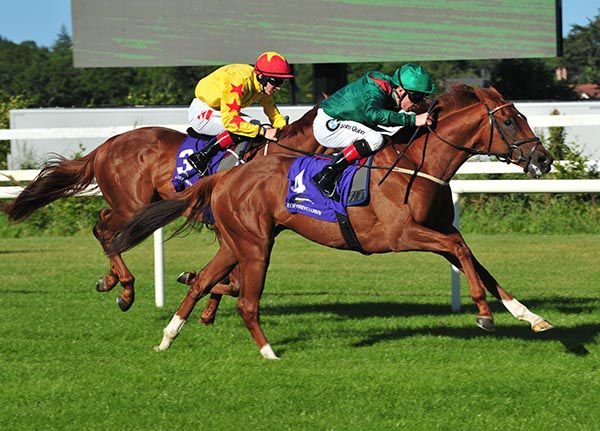 Masaff is perhaps the most interesting contender for the Irish Stallion Farms EBF Yeats Stakes at Navan on Saturday.

Five runners are set to go to post for the one-mile-five-furlong feature, and the extended trip is a step into the unknown for them all.

Masaff showed plenty of potential when making a winning juvenile debut at Leopardstown last June, with trainer Dermot Weld suggesting his Raven’s Pass colt could be a potential Stakes horse in the immediate aftermath.

That view was cemented when he finished third and second in Group Two and Group Three company respectively at the same track in the autumn and his Irish Derby entry in particular catches the eye ahead of his reappearance.

Aidan O’Brien's Western Australia sets the standard with a rating of 107, but he has a bit to prove after finishing only fifth when a hot favourite for the Feilden Stakes at Newmarket on his latest outing.

O’Brien’s Empire State has top weight of 9st 10lb to overcome in the Ladies Day At Navan 1st June Handicap, but must have every chance of doing so off the back of a Dundalk victory last month.

The 89-rated Barbados sets the standard for O’Brien in the Follow Navan On Twitter Maiden, although a market move for Michael Halford’s Cape Cross newcomer Rayounpour would be significant.

Sheila Lavery and Robbie Colgan team up to good effect, so Gypsy Dancer makes each-way appeal on debut in the Irish Stallion Farms EBF Median Auction Maiden. Twenty Minutes came from last to first to win well at Naas, which makes him of significant interest in the navanracecourse.ie Handicap.

His trainer, Damian English, also has prospects with Dance Alone, who contests the Biggest 90s-00s Disco Concert 28th June At Navan Handicap. Royal Court who has been placed no less than seven times, could get his turn for Joseph O’Brien in the navanadventurecentre.ie Maiden.

The trainer also saddles Linger for the Troytown Bar Handicap after delivering at Gowran Park earlier in the month.