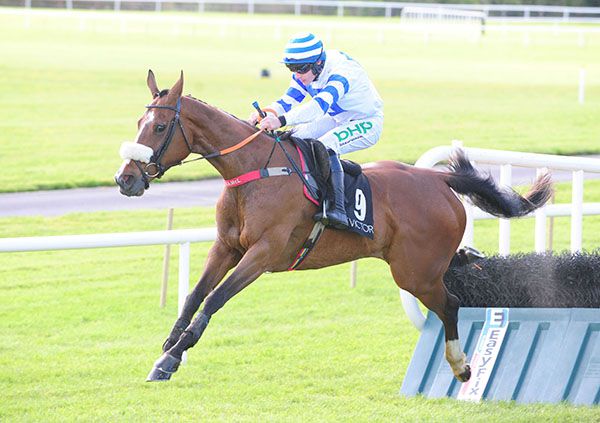 The Dermot McLoughlin trained Monstrosity was an easy winner of the opener at Ballinrobe this evening, the BetVictor Maiden Hurdle.

A good fourth to Galilean in a much stronger contest at Fairyhouse, on what was his debut for McLoughlin, the trained seven-year-old was expected to get off the mark today, going off the clear 4/5 favourite.

Having raced mainly in third under Paul Townend, the son of Mahler improved a place into second with just under a circuit to good.

Racing in a first time tongue-strap, the bay victor eased to the front from two out. An awkward jump at the last didn't stop his momentum, as he soon stretched clear, going on to prevail by ten lengths. Dedanann (12s to 9s) kept on well to take second under Liam Quinlan for John Ryan, while the Oliver McKiernan trained Chief Of Police (20/1) was another two and a quarter lengths back in third. Erratic Path who was sent off the 5/2 second favourite, was fourth.

"Paul said he did it well, he wouldn't want the ground any quicker than it is but I thought that myself," said McLoughlin.

"He's a big lump of a horse and he'll probably go and jump a fence, depending on the ground. We'll get over that first.

"I was a bit anxious about the ground but in fairness to them they did a good job. The time of year it is, it's difficult.

The winner was previously trained by Noel Meade and is a half-brother to Ted Dolly, who won four times.

The Stewards received a report from P.L. Malone, Irish Horseracing Regulatory Board Clerk of the Scales, regarding the fact that K.C. Sexton, rider of Beechmount Maisie weighed in at 1.1 lbs overweight. Evidence was heard from the rider concerned, who stated that he drank a glass of water after weighing out which may have accounted for the overweight on weighing-in. Having considered the evidence, the Stewards were satisfied that K.C. Sexton was in breach of Rule 231 (iii) and having taken extenuating circumstances into account they severely cautioned him.