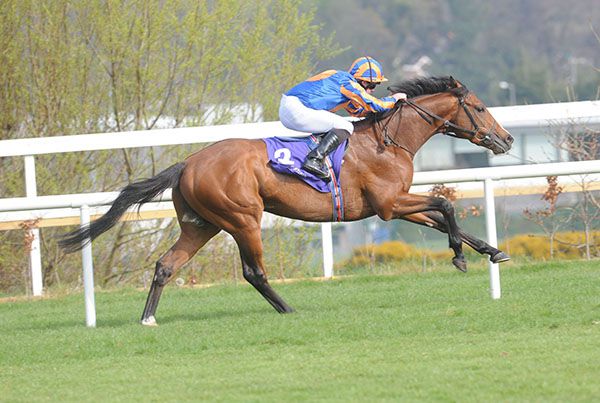 Aidan O’Brien is hoping Broome can back up an impressive seasonal debut success when he takes his chance in the Derrinstown Stud Derby Trial Stakes at Leopardstown today.

The son of O’Brien’s 2014 Epsom Derby hero Australia laid down a significant marker when taking the Ballysax Stakes by eight lengths over this course and distance.

O’Brien revealed the plan was always to return to the Dublin venue for this Group Three contest over the same mile and a quarter, as the next stepping stone to possibly greater things.

“The plan at the start of the season was always for Broome to go to Leopardstown for the Ballysax Stakes and then back for the Derrinstown Stakes. We’ve been very happy with him since the Ballysax,” said the Ballydoyle handler.

“Broome has always been a lovely, laid-back horse and he seems to be in good form since his last run so we’re looking forward to running him again at Leopardstown on Sunday.

“He has done everything right. We’ve always liked him a lot, he was just beaten in a Group One last year and he was only a baby.”

O’Brien’s son, Joseph, throws Buckhurst into the mix in the belief this colt by Australia could be Derby material.

His only run to date came five weeks ago when he led on the line to deny Jack Yeats by a nose in a one-mile maiden on this course.

“We want to give him every chance of being an English Derby horse so he’ll go to the Derrinstown and we’ll take it from there with him, but he’s in good form at home,” said the County Kilkenny handler.